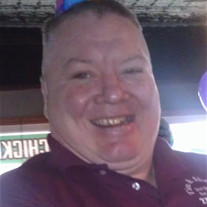 Christopher J. "Bubba" Gass, age 50, of Chillicothe, passed away unexpectedly on Wednesday, March 20, 2019 in the comfort of his home with his wife by his side. Chris was born on March 21, 1968 in Peoria, Il to Larry and Carolyn Gass.  He married Rebecca Segler on October 10, 2010.  They have been together for 21 years. Surviving are his wife, Becky; his parents; his brother, Scott (Holly Herrera) Gass of Chicago; his son, Matthew Gass of Glasford; his daughter, Lyndsey Risen of Glasford; and three grandchildren, Payzlie Gass and Jackson and Sawyer Risen.  Also surviving are his special grandmother, Hazel Scott of Mapleton; and many aunts, uncles, and cousins.  He was preceded in death by his grandparents, Bob and Pat Gass; and his grandfather, Bill Scott. Chris loved sports, especially the St. Louis Cardinals, and listening to music.  His favorite band was Tool.  Chris enjoyed spending time with his family and being a Pop-pop to his grandchildren. Cremation rites will be accorded and a Celebration of Life will be held on Saturday, April 13, 2019 from 1pm to 3pm at Larry's Driftwood in Creve Coeur.  In lieu of flowers, memorials may be made to St. Jude.  Arrangements were handled through Weber-Hurd Funeral Home in Chillicothe.

To send flowers to the family or plant a tree in memory of Christopher J. Gass, please visit our floral store.

To send flowers to the family in memory of Christopher Gass, please visit our flower store.