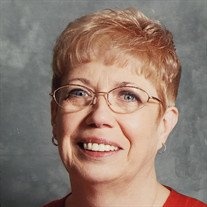 In addition to her parents, she was preceded in death by two grandchildren, Michael and Jesse Whiting.

Carol graduated high school from Academy of Our Lady and went on to earn her degree in radiologic technology from OSF St. Francis in Peoria, IL. She worked as a radiology technician for Drs. Johnson & Hart followed by Proctor Family Physicians before retiring in 2013.
She was a member of St. Edward Catholic Church in Chillicothe, IL, where she served as an Extraordinary Minister of the Eucharist. Always wanting to be of service and help others, Carol was involved in Cursillo, went on several missionary trips with the church, and was a member of Altrusa, an organization dedicated to improving communities through personal service, and volunteered at a local nursing home. Carol was a Cubs fan and enjoyed traveling, reading, and shopping.

Cremation rites will be accorded, and a Memorial Mass will be held at a later date. Memorials in Carol's name may be made to the Parkinson's Foundation.

To send flowers to the family or plant a tree in memory of Carol Volpe, please visit our floral store.

To send flowers to the family in memory of Carol Volpe, please visit our flower store.