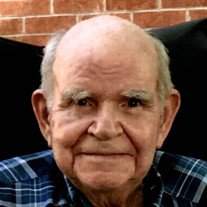 Carl was born on January 6, 1925 in Baylis, Illinois to William Donley and Mary Edith (Rose) Toland. He married Marjorie Delores Allensworth on December 17, 1948 in Hannibal, Missouri. She preceded him in death on December 8, 1991. Also preceding him in death are his parents; three sisters and two brothers.

Carl served in the U.S. Army during World War II in the battle campaigns in Northern France and Germany and received two bronze battle stars and a purple heart for his service. He worked as a welder for LeTourneau Westinghouse and then for WABCO, retiring in 1985. Carl received his Bachelor's Degree in Theology in 1969 from the Illinois Baptist Institute. He was an avid walker but his passion was flying. He started flying in 1949 and in 1997 he built his own Ultra Lite Plane.

A graveside service with military honors will be held on Thursday, September 17, 2020 at 11am at Chillicothe City Cemetery. Memorials may be made to Wounded Warriors. Online condolences may be made through www.hurdfamilyfunerals.com


To send flowers to the family or plant a tree in memory of Carl E. Toland, please visit our floral store.

To send flowers to the family in memory of Carl Toland, please visit our flower store.