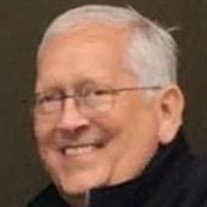 Carl was born on April 21, 1948 in Lincoln, Illinois to Carl Augustus and Helen Mildred (Girdler) Spencer. He married Trudy Jo Ohlmann on August 2, 1974 in Chillicothe.

Surviving are his wife, Trudy; his children, Myron Spencer of Chicago, IL, Carl (Chrissy) Spencer III of Chillicothe, IL and Carissa (Alyssa) Isbell of Washington, IL; one grandson, Ridge; and one brother, Paul (Jean) Spencer of Waynesville, IL. He was preceded in death by his parents and two brothers, Joseph and Thomas Spencer.

Carl served in many branches of the military, starting with the U.S. Marine Corps from 1967 to 1970 and then serving in the IL Air National Guard, IA Army National Guard and U.S. Army Reserves, until he retired in 2008 as Chief Warrant Officer. Carl also retired from Caterpillar in 2011, after 39 years of service. He was a member of Crossroads Baptist Church and was a life member of the AMVETS Post 99. Carl enjoyed spending time with his family, woodworking and refinishing furniture.

Services will be held on Saturday, October 24, 2020 at 2pm at Weber-Hurd Funeral Home in Chillicothe with visitation held one hour prior to the service at the funeral home. Wearing of masks and social distancing will be in effect. Interment with military honors will be at Chillicothe City Cemetery. Memorials may be made to Crossroads Baptist Church or Illinois Cancer Care Foundation for Multiple Myeloma Research.


To send flowers to the family or plant a tree in memory of Carl A. Spencer, please visit our floral store.

To send flowers to the family in memory of Carl Spencer, please visit our flower store.