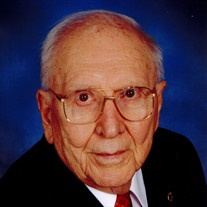 Calvin graduated from Northwestern University in 1943, with a B.S. Degree in Accounting and the Naval ROTC program. Upon graduation, he was commissioned in the Supply Corps U.S. Navy during WW II where he worked in the Naval Research Laboratory and both the Fleet and Patrol Aircraft Service Units. He resigned as a Fleet Air Wing Four Staff Supply Officer, Lieutenant (jg). Calvin then worked for Caterpillar in various accounting positions for many of the company's plant locations, both in the U.S. and overseas, before retiring as Senior Accounting Manager, Accounting General Offices, in Peoria, IL, in 1987. Calvin was a member of the National Association of Accountants, holding various national offices. He also wrote accounting articles which were published in many accounting and business related magazines and books.

Services will be held on Monday, June 24, 2019, at 11am at Cumerford-Hurd Funeral Home, 428 W. McClure Ave. in Peoria. Visitation will be held one hour prior to the service at the funeral home. Burial will be at Roberts Cemetery in Morton. Rev. Dr. Laura Reason will be officiating. Memorials may be made to the charity of the donor's choice. Online condolences may be made through www.cumerford.com


To send flowers to the family or plant a tree in memory of Calvin A. Vobroucek, please visit our floral store.

To send flowers to the family in memory of Calvin Vobroucek, please visit our flower store.