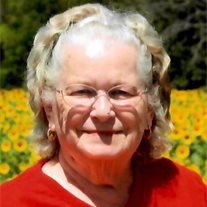 Bonnie L. Picl Cahill Mabeus, age 89, of Edwards, passed away on Friday, January 18, 2019 at Grandview Alzheimer's Special Care Center in Peoria. Bonnie was born on November 21, 1929 to Joseph and Viola Mae (Kennedy) Picl. She married Roderick Francis Cahill on August 18, 1951 and he preceded her in death in March of 1985.  She later married Laverle E. Mabeus on October 21, 1989 and he preceded her in death on October 15, 2000.  Also preceding her in death are her parents; her son, Roger L. Cahill; her granddaughter, Holly Adams; and her great-grandson, Joseph Theobald. Surviving are her children, Pamela J. (John) Morris and Phillip D. (Charlene) Cahill; four grandchildren, Rod (Holly) Cahill, Brett (Stephanie) Cahill, Andy (Melissa) Theobald, and Jason (Hannah) Theobald; and 16 great-grandchildren. Bonnie worked as a secretary for Civil Defense in Edwards for many years and later became coordinator of the facility until she retired in 1979.  Bonnie was an avid card player and loved to read.  Most of all she loved her family and friends and she loved to entertain for them.  She enjoyed traveling with Laverle in their mobile home all over the United States.  Bonnie will be missed by her family and friends and all who knew her friendly and giving personality. Cremation rites will be accorded and there will be no services.  Arrangements were handled through Weber-Hurd Funeral Home in Chillicothe.

To send flowers to the family or plant a tree in memory of Bonnie L. Mabeus, please visit our floral store.

To send flowers to the family in memory of Bonnie Mabeus, please visit our flower store.