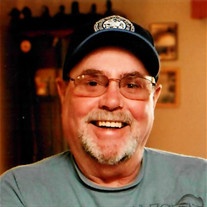 Billy "Dean" Stroud, age 69, of Chillicothe passed away on Friday April 8, 2016 at 7:20 pm at his home surrounded by his family and beloved pets.
He was born on August 3, 1946 in Sparland, the son of Buck and Edith (Childers) Stroud. He married Julie A. Wright on February 12, 1966 in Elmore City, OK.
Dean is survived by his wife, three children; Chris Stroud of Aurora, William D. Stroud of Bloomington, and Deanna Clark of Peoria, four grandchildren; Lindsey Stroud of Chillicothe, Sydney Stroud of Aurora, Jake and Taylor Clark of Washington, IL, two great grandchildren, and one brother Troy (Dawn) Childers, Sr. of Chillicothe.
He was preceded in death by this parents.
Dean was a Vietnam-era War veteran serving in the Air Force from 1963 to 1964.
Dean attended Illinois Central College and was a welding instructor for ten years for Ironworkers Local 112. Dean had a long career in welding, as an Ironworker and Boilermaker with Boilermakers Local 60 for seventeen years and Ironworkers Local 112 for thirty years.
Dean loved the outdoors, fishing, and duck and goose hunting. He liked to play pool, and he had a winged sprint racing car and racing team. He also owned and operated Stroud Fur Company.
Dean's wish was to be cremated. Friends and relatives are invited to attend a visitation held on Wednesday, April 13th, 2016 from 4-7 pm at Weber-Hurd Funeral Home, Chillicothe. Memorials may be made to S.A.M.S. Stray Animal Midway Shelter of Hanna City at 328 S. Pinkerton Rd. Hanna City, IL


To send flowers to the family or plant a tree in memory of Billy "Dean" Stroud, please visit our floral store.

To send flowers to the family in memory of Billy Stroud, please visit our flower store.