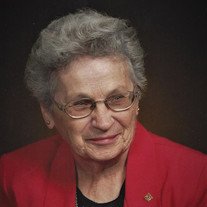 Beulah Marion Jackson, age 89, formerly of Chillicothe and Lacon, passed away on Sunday, December 16, 2018 at the Toulon Nursing Home.   Beulah was born on August 8, 1929 in East Peoria to Frank B. and Edith E. (Loomis) Stanley.  She married Edward J. Jackson on April 10, 1954.  He preceded her in death in September of 1999.  Also preceding her in death are her parents; her siblings, Frank, Paul and Gwendolyn Stanley, Kathryn Cosner and Edith Garrison; and two grandchildren, Chad W. and Amy D. Ramsay. Surviving are her children, Dan Jackson of St. Paul, MN, Gary (Brenda) Jackson of St. Louis, MO and Diane (William) Ramsay of Wyoming, IL; her grandchildren, April (Brandon) Bliss of Point Lookout, MO, Jason (Lisa) Ramsay of Wyoming, IL, Lucas (Lisa) Ramsay of Wyoming, IL, Emily (Brian) Barrow of Chattanooga, TN, and Elliot (Sarah Jurado) Jackson of Seattle, WA; her great-grandchildren, Makenna (Michael) Dickinson, Jackson, Elijah, Jonas, Madelyn and Ethan Bliss, Amy Ramsay and Lennon Ramsay, Ariel (Josh) Zuelly, Gabriella and Mark Butcher, and Coltrane Jurado; and one great-great-grandchild, Hunter Aldredge.  Also surviving are many nieces and nephews.  Beulah was a member of Calvary Baptist Church in Chillicothe.  She was always known for reading her Bible and she literally prayed daily for her family and her friends.  Beulah enjoyed playing the organ, playing solitaire on the computer, playing Phase10 with the grandkids and crocheting baby blankets for her grandchildren and great-grandchildren.  A memorial service will be held on Saturday, March 23, 2019 at 11am at Calvary Baptist Church in Chillicothe. In lieu of flowers, memorials may be made to the Toulon Nursing Home, Hospice Compassus or Calvary Baptist Church.

To send flowers to the family or plant a tree in memory of Beulah Marion Jackson, please visit our floral store.

To send flowers to the family in memory of Beulah Jackson, please visit our flower store.