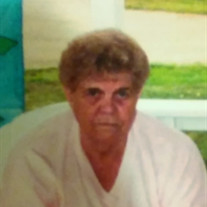 Bessie I. Hainline, 91, of Chillicothe passed away on January 16, 2018 at Proctor Hospital in Peoria. Bessie was born on August 28, 1926 in Peoria the daughter of Gilbert and Eithel (Nash) Jones. Surviving are her children: Gloria (James) Gehrig of Edelstein, Janet (Charles) Miars of Chillicothe, Bernie Evans of Pal Metto, FL, and Susan (Mike) Callahan of Wyoming; thirteen grandchildren; ten great grandchildren; two brothers and one sister. She was preceded in death by her parents. Bessie worked in several places in Chillicothe, including bartender at the Chillicothe VFW. Bessie's wish was to be cremated. A private family service will be held later. Memorials may be made in her name to the Alzhemiers Association. Weber-Hurd Funeral Home is in charge of arrangements.

To send flowers to the family or plant a tree in memory of Bessie Hainline, please visit our floral store.

To send flowers to the family in memory of Bessie Hainline, please visit our flower store.