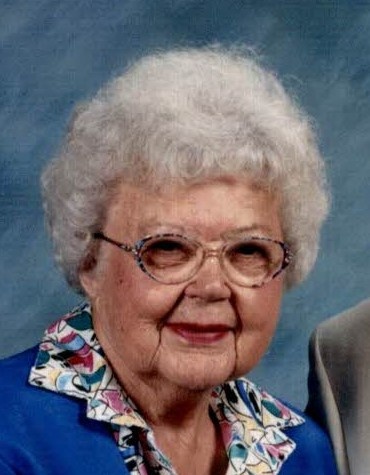 Barbara Jean Eckhoff, age 95, of Chillicothe, passed away on Tuesday, July 27, 2021 at Heritage Health in Chillicothe.

Barbara was born on Tuesday, December 22, 1925 in Lee Township, the daughter of Ray Victor and Mary Esther (Homer) Sweney.  She married Milford “Mel” Eckhoff on May 15, 1955 in Prairie City, IL.

Surviving are her son, David Eckhoff; two granddaughters, Alexis and Emily Eckhoff; a step-grandson, Cody Lewis; and a step-great-grandson.  She was preceded in death by her parents; her husband; her sisters, Virginia Effland and Marion Gray; and her brother, H. James Sweney.

Barbara was a graduated of Prairie City High School and Western Illinois University.  She taught in DePue for a few years and then worked for an insurance company in Peoria.  Upon her marriage to Mel, she worked as the office manager/bookkeeper at Eckhoff Brothers Auto Repair and Mel’s Tune Up.  She volunteered making burial clothing for preemies and loved making “scrubbies” for her church and many others.  She was a member of St. Mark Lutheran Church in Chillicothe.

Barbara and her husband, Mel, were avid boaters on both the Illinois and Mississippi Rivers.  They were charter members of the Indian Head Boat Club.  They also purchased a camper and loved to travel, attending rallies all over the U.S. and seeing a lot of the lower US and Canada.  They spent many winters in Florida visiting Mel’s sister in Jacksonville.

A funeral service will be held on Monday, August 2, 2021 at 11am at Weber-Hurd Funeral Home in Chillicothe with visitation held one hour prior to the service.  Burial will be at Lacon Cemetery.  Memorials in her name may be made to her church or St. Jude’s Children’s Hospital.  Online condolences may be made through www.weberhurdfuneralhome.com

To send flowers to the family or plant a tree in memory of Barbara J. Eckhoff, please visit our floral store.

To send flowers to the family in memory of Barbara Eckhoff, please visit our flower store.