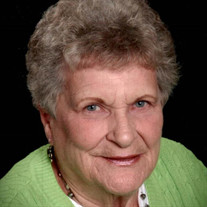 Barbara was born on July 26, 1925 in Buda, Illinois to Howard Baxter and Esther Frances (Rowland) Webb. She married Asher Allington Arnold on June 15, 1947 in Chillicothe. He preceded her in death. Also preceding her in death are her parents; her son, Rick Arnold; her daughter, Debbie Arnold; her grandson, Nicholas Flagg; her sister, Kay Claywell; and her brother, Howard Webb.

Barbara worked for Foster and Gallagher for 13 years and then for Bush Holloway Ford until she retired. She was a member of the Chillicothe First United Methodist Church and was active in the Rebecca's Circle.

Barbara enjoyed crocheting and playing pinochle and visiting with her friends and she loved spending time with her family, especially her grandchildren and great-grandchildren. Barbara had a quick wit and great sense of humor. She will be greatly missed by all her knew her.

To send flowers to the family or plant a tree in memory of Barbara Louise Arnold, please visit our floral store.

To send flowers to the family in memory of Barbara Arnold, please visit our flower store.