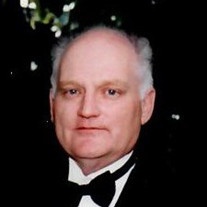 CHILLICOTHE - Armond K.Wilson, 73, of Chillicothe passed away on July 7, 2018 at Heritage Health Care Center in Chillicothe. Keith was born on Sept. 28, 1944, to Armond Ralph Wilson and Patricia Frank Wilson in Kewanee. He was raised and schooled in Princeville, where he graduated from Princeville High School in 1963. Keith joined the United States Air Force in 1964, was trained in Texas as a mechanic for the C-130 transport aircraft, and was stationed briefly in Paris, France, a time that was recalled fondly by him in later years. His time in the service engendered a lifelong love of airplanes and aviation. While serving at Lockbourne AFB in Columbus, OH, he met Karen Sue Gill. They married on April 2, 1967. After his discharge from the Air Force, Keith found employment with Caterpillar, Inc, first working as a machinist. For many years he worked as a factory accounting clerk at the Technical Center in Mossville, before ending his tenure as a diesel mechanic at the Proving Grounds in Washington, IL. He retired from Cat after 32 years in 2000. During this time, Keith and Karen lived in Chillicothe, where they raised two children. Keith was active in the Chillicothe Lions Club for many years, serving a term as secretary, and was a member of American Legion Post #9 in Chillicothe. Keith is survived by his wife of 51 years, Karen; a son, William of Tucson, AZ; a daughter, Valorie, of Peoria; a granddaughter, Erika Keith of Morton; a grandson, Kain Smedley of Peoria; three sisters, Pamela, Diana and Denise; many nieces and nephews. He was preceded in death by his parents, Ralph and Pat, and a sister, Patsy Miller. A funeral service will be held on Friday, July 13, 2018 at 5:00 pm at Weber-Hurd Funeral Home in Chillicothe. Visitation will be held two hours prior to the service time at the funeral home. A celebration of life will be held following at Weaver Ridge Golf Club, Peoria. Memorial donations may be made to St. Jude Children's Hospital or to Wounded Warriors. A burial will take place at a later time.

To send flowers to the family or plant a tree in memory of Armond Wilson, please visit our floral store.

To send flowers to the family in memory of Armond Wilson, please visit our flower store.