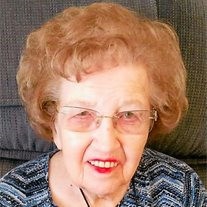 Anita June Logsdon, 97, of Chillicothe passed away on Wednesday, February 21, 2018 at Heritage Health in Chillicothe. Anita was born on May 28, 1920 in Toluca to Enoch and Pearl (Davis) Berresford. She married John S. "Jack" Logsdon on February 9, 1942 in Washington, D.C. He preceded her in death on January 3, 2015 in Henry. Surviving is one daughter, Pamela (Richard) Thompson of Chillicothe; and one grandson, Wesley Thompson of Peoria. Anita was a member of Chillicothe First United Methodist Church. She was a homemaker who enjoyed cooking and traveling. Sincere thanks to Heritage Health, UnityPoint Hospice of Peoria, and Evergreen Senior Living for their wonderful care of Anita. Cremation rites have been accorded. A memorial service will be held at a later date. Memorials in honor of Anita may be made to the Alzheimer's Association. Anita's online memorial may be viewed at www.weberhurdfuneralhome.com.

To send flowers to the family or plant a tree in memory of Anita Logsdon, please visit our floral store.

To send flowers to the family in memory of Anita Logsdon, please visit our flower store.