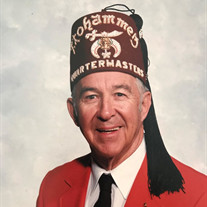 Andrew F. Fraser (Andy) passed away peacefully surround by family on January 13, 2018. Andy was born on Aug 5, 1922 in Ottawa, Ontario, Canada to Annette (Faris) and J.G. Carl Fraser. He married his sweetheart Jean Cairnie in Ottawa on Dec. 28, 1946. She preceded him in death. Andy served as a navigator/wireless operator in the Royal Canadian Air Force from 1942-1945. He graduated from the University of New Brunswick with a BS in forest engineering in 1949. He worked for M.S. Research Foundation in Nova Scotia and then moved to Ottawa as a navigator with Spartan Air Service. Andy began working for Caterpillar in 1951. Caterpillar allowed him to travel and work around the world, from the Maritime Canadian Provinces, to Australia, to New England, and finally to Peoria, IL. He retired from Caterpillar in 1985. Andy's retirement years were filled with volunteering as a tour guide for different Caterpillar buildings and working as a consultant for the retired executives in Slovakia in 1992-1994. He enjoyed volunteering with SeniorNet for several years. He was very involved with the Mohammed Shrine, especially helping with the circus, and was on the Scottish Rite Scholarship Committee. Andy was thrilled to be able to go on the Greater Peoria Honor Flight in May 2016. He was proceeded in death by his wife and brother, Dr. Donald Fraser. He is survived by his 3 children: Nancy (Eric) Hughes of Vermont, Laurie (Stan) Knobloch of Edwards, and Bruce (Debbie) Fraser of Maine and numerous grandchildren and great grandchildren. His family would like to thank Cindy, Suzie, and Brittany as well as the Hospice nurse Susan and OSF nurse Barb. There will be a celebration of life on Saturday, January 20 from 1-3pm at the Fox Pub in Peoria. Donations can be made to the Mohammed Shriners of Peoria, Illinois or the Greater Peoria Honor Flight. Andy's online memorial website may be viewed at www.cumerford.com

To send flowers to the family or plant a tree in memory of Andrew Fraser, please visit our floral store.

To send flowers to the family in memory of Andrew Fraser, please visit our flower store.