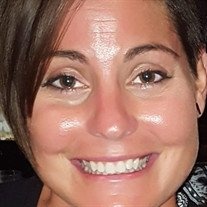 Andrea (or "Ondrea" as she would spell it to be sure no one said "And" in their pronunciation) Lynn Fischer died unexpectedly in her Phoenix, Arizona residence on Friday, January 24, 2020 at the age of 37.

She was born in Peoria, Illinois on October 2, 1982 to James L. and Joan M. Fischer; mainly as a result of her sister begging for a sibling since the time she learned to speak. She attended St. Edward Catholic Grade School and graduated from Illinois Valley Central High School in 2002. She attended undergraduate college at Illinois State University and the University of Illinois at Chicago. She also recently attended graduate school at Loma Linda University in California and began pursuing her dreams of world travel as part of her career. She spent time studying in Geneva, Switzerland and time working in Sierra Leone, Africa, the place that stole her heart. She was passionate about serving those who needed it most, loved learning about new cultures, and had a personal goal to solve the world's healthcare crisis. Her most recent accomplishment was facing her fear of heights by hiking in and out of the Grand Canyon. She had also spent some time living in Macau, China and St. Thomas, USVI.

Andrea was bubbly and beautiful from the day she was born. She could light up a room with her smile, and radiated a fun, happy, and upbeat energy that was inarguably contagious. Her friends meant the world to her, and she proudly served in the role of Auntie to many of their children. She loved to play dress up and go on wagon rides with them, fitting right in since she was a child at heart herself. She certainly squeezed every ounce of fun and adventure out of life during her short stay here on earth.

She is survived by her father, James L. Fischer of Chillicothe, Illinois, her sister, Allecia L. (Fischer) Thibeault of Tucson, Arizona, her nephew, Caleb Thibeault, currently of San Diego, California, her nephew, Joseph Fennell of Tucson, Arizona and many, many friends close enough to be family. She is preceded in death by her mother, Joan Fischer of Chillicothe, Illinois and her grandparents, Robert A. and Marion M. Heinz of Peoria, Illinois.

A Funeral Mass will be on Sunday, February 2, 2020 at 2pm at St. Edward Catholic Church in Chillicothe with visitation beginning at noon. Cremation rites will be accorded following the services. In lieu of flowers, donations to Partners In Health at donate.pih.org in Andrea's name would be a wonderful way to honor her memory.


To send flowers to the family or plant a tree in memory of Andrea Lynn Fischer, please visit our floral store.

To send flowers to the family in memory of Andrea Fischer, please visit our flower store.