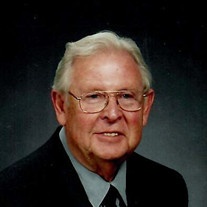 Alfred R. "Tote" Gray, 86, of Peoria passed away peacefully on Sunday, March 11, 2018 at Grand View Alzheimer's Special Care Center in Peoria. Tote was born on December 30, 1931 in Henry to John and Elva Gray. He is survived by his wife of 66 years, Shirley; one son, Keith (Joy) Gray, one daughter, Sherry (Stan) Hayes; two grandsons, Grant Gray and Adam Sondag; and one brother, John (Barb) Gray, Jr. He was preceded in death by his parents, two brothers, Wally and Harley Gray; and one sister, Judy Secrest. Tote lived and breathed motorcycles and owned and operated Grayboy Motorsports for over 45 years. He was a strong supporter of motorcycle racing over the years. He sponsored many racers and a racing team. Tote was the president of the Illinois Motorcycle Dealer's Association in 1977 and became race director after that. He was instrumental in getting the city of Springfield and the Illinois State Fairgrounds to let the Springfield Mile return in 1981. Tote was a U.S. Army veteran of the Korean War, serving from 1952-1954. A funeral will be held for Tote at 10:00am on Thursday, March 15, 2018 at Mossville United Methodist Church in Mossville. Friends and relatives are invited to a visitation with the family from 5:00-7:00pm on Wednesday, March 14, 2018 at Weber-Hurd Funeral Home in Chillicothe. Burial will be in Chillicothe City Cemetery. Memorials may be made to the Alzheimer's Association or Mossville United Methodist Church. Tote's online memorial may be viewed at www.weberhurdfuneralhome.com.

To send flowers to the family or plant a tree in memory of Alfred Gray, please visit our floral store.

To send flowers to the family in memory of Alfred Gray, please visit our flower store.