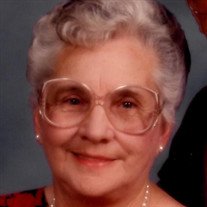 Phyllis Jacqueline (Puckett) O'Bryant went to be with the Lord on May 29, 2019 at Heddington Oaks in Peoria, IL.

She enjoyed collecting angels, knitting, making her famous peanut brittle and playing bingo. Upon retiring, John and Jackie moved to Donna, Texas, where they spent the next 25 years. After becoming ill, they moved back to Illinois to be closer to their children.

Cremation rites will be accorded and a graveside service will be held at a later date in Bryant, IL with the Rev. Dr. Diann O'Bryant officiating. The family would like to thank the staff of Heddington Oak for their care and compassion in taking care of their mother. Arrangements were handled through Weber-Hurd Funeral Home in Chillicothe.

To send flowers to the family or plant a tree in memory of Phyllis J. O'Bryant, please visit our floral store.

To send flowers to the family in memory of Phyllis O'Bryant, please visit our flower store.