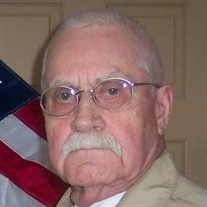 Surviving are his wife, Arlena; his daughters, Pamela Chambers of Oregon, Lora Bryant of Chillicothe, IL and Connie (Raymond) Barkowski of Rutland, IL; his grandson, Randy (Marcy) Doran of Sparland, IL and his great-grandchildren, Bailey, Logan, Calli and Chloe Doran. Also surviving are two sisters, Thelma Charlotte Yocum of Chillicothe and Ruby (Doug) Hargrove of California; and many nieces and nephews. He was preceded in death by his parents; two sisters and one brother.

John graduated from Thomas Downey High School in Modesto, CA. After high school, he served in the U.S. Marine Corps from 1955 to 1963. John worked in Law Enforcement with the Marshall County Sheriffs Dept., for Irions Concrete in Chillicothe, and then for Caterpillar for over 30 years, retiring in 1992. He was a member of the Illinois Sheriffs Association, the Mason Lodge in Henry, the American Legion and the VFW Post #4999 in Chillicothe, where he was an active member of the Honor Guard for many years. John was a car and gun enthusiast, always going to vendor shows; he was a builder of dune buggies; owned horses over the years; and he was a regular at Victoria's Diner. Most importantly, John loved spending time with his family, especially his grandchildren and great-grandchildren.


To send flowers to the family or plant a tree in memory of John W. Galbreath, please visit our floral store.

To send flowers to the family in memory of John Galbreath, please visit our flower store.