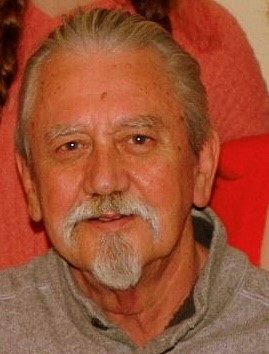 James, the son of James Lloyd Lewis and W. Joyce (Trout) Lewis, born in Eldorado, Illinois April 15, 1949.  The eldest of four children, surviving are his sisters Vanesta (Mike) Montbraind and Pamela (Philip) Bireline.  James was proceeded in death by his younger brother Dennis Mitchell Lewis (1993). Their family made their home in Rome, Peoria and settled in Chillicothe. Many of their extended family lived in Southern Illinois, were he and his family spent many summers visiting his grandmother and great aunts and uncles. James worked all through high school at Peters Floral, providing his family with a beautifully flock tree each Christmas.  Jim was the last class to graduate from Chillicothe High in 1968.  In June, of that year, Jim started his career at the J & L later know as LTV Steel in Hennepin, IL. Where he spent just over 30 years working swing-shift as an operator on the GAL Line. In the early 2000’s Jim began working as a security guard and machine operator at Aisin Manufacturing.  Jim worked nearly 55 years; he was proud of the work he did to provide for his family and was proud to know he was the oldest working male in is family.

In 1977, he and Nancy Ann Brown married, building a home together for 29 years, in Chillicothe and Washington, Illinois.  Their children Amber (Tony) Loser and Jesse Lewis (Megan Hathcock). Jess and Amber sometimes referred to as JAMBER or “Them Kids” as he used to say– were raised on Jim’s crazy swing-shift schedule, with only one long weekend a month, which didn’t allow for long family vacations.  They spent their childhood on the Illinois River, boating, fishing, tubing, digging for clams, and jumping off the back of the boat, oh and that one time when Jesse choked on an oreo and dad saved the day. Growing up in the 80’s, on the river as kids remember that sunscreen wasn’t “a thing” our naps as toddlers were on a boat under a towel, we learned to bait our own hooks, string up our catch, we learned to swim at an early age, and always knew which way to lean if the boat was off balance.  Dad was always one to pitch in and take on house duties while he was off either from the Steel Mill explosion in 1994, his triple by-pass in 1999 or he happened to be on days when mom worked second shift, he would make his famous “Dead Man’s Chili” and as a treat, Cinnamon and sugar toast in the oven or homemade cookies.  Our home was filled with love, laughter, music, friends, many times on school nights, but we also learned from two very hardworking parents, not to “sweat the small stuff” and when all else fails, “go to work”.

Jesse and Amber as adults grew their families, Jim’s grandchildren Sierra Lewis, Anasea Lewis, Haleigh Cobb, Nevaeh Lewis, Tyson Lewis, Mati Cobb and Bayen Loser.  Jim was in awe of his grandchildren, always bragging them up at every chance he had.  Most of their lives he lived in Southern Illinois, he never missed sending a birthday card. Not long after Jim moved to Southern Illinois, he met Vicki Elaine Cernkovich in 2003 and soon she became his wife, they shared 17 wonderful years together. Both Vicki and Jim had raised their children, had grandchildren, and had both been divorced after many years of being married.  They were a perfectly blended match, their adult children watched their love grow, awe struck- Their love would light up the room.  Vicki paid no mind to Jim’s old man fussiness, and it was his life’s mission to make that woman smile every single day.  Jim continued to work after moving to Energy, Illinois at Aisin Manufacturing retiring in October 2021. He shared fond memories with his family about his Aisin family, he really loved making people smile when they were having a bad day. He retired one day out of the blue, saying he’d rather not get up at 5AM anymore.  For 17 years Jim and Vic covered as much ground as one couple could, they enjoyed time on their motorcycles, Can-Am and eventually the Jeep.  They spent time with fellow riders and participated in many charity rides over the years. Jim’s family would visit a few times a year, Vicki would be so tickled to see all of us.  They would take us on the “Southern Illinois Tour” taking pictures at look outpoints, Bald Knob Cross, talking about the history and driving all over the countryside.  Jim loved the wildlife and landscape of Southern Illinois, which only fueled him to get back into photography, he has shared thousands of pictures over the years. When the grandkids would head home, he would send them with a booklet or collage of their adventures.

Jim, sadly lost Vicki to Co-vid in November of 2020, he brought her home on hospice and dedicated every moment until her last breath to her care for her.  After losing his wife, He decided to move North to be closer to his family, purchasing a home in Chillicothe January 2022.  He was looking forward to spending time with his grandchildren, reuniting with old friends and planned projects for him and his son around the house.

James, his given name. Jim is what he went by, Jimmy is what his Southern Illinois family called him, Smookin Jim was the name Jesse's friends called him. His Chillicothe friends called him Louie or Jimbo.  To us he was just Dad…as his daughter, he was the first man to open a door for me, give me my first dance, first driving lesson, a shoulder to cry on with my first broken heart.  As his son, he taught me how to drive the boat, his motorcycle and was my first Tattoo client.  He may not have had all the answers, the right words, or followed the rules, he wasn’t perfect but, he was ours and we are better people for it. We will miss his unconditional love – grandiose story telling abilities and occasionally, his “Dead Man’s Chili”

Memorials can be made to Nubability Athletics 221 E Main St. DuQuoin, IL in his grandson’s name Bayen Loser.  Cremation Rites were accorded and a Memorial, Celebration of life will be held on Saturday, April 23 2022 Beginning at 10am receiving guests until 12pm at Weber Hurd Funeral Home.  A gathering of friends will be held at The Whistle Stop to share in memories and celebrate Jim’s life.  Out of town friends and family please consider using our local florist for floral arrangements or plants for the service.  Stem’s by Allison – 915 Second Street Chillicothe, IL 61523 (309) 258-8596

To send flowers to the family or plant a tree in memory of James A. Lewis, please visit our floral store.

To send flowers to the family in memory of James Lewis, please visit our flower store.