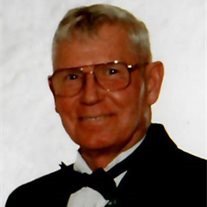 Jack Murphy, 88, of Sparland passed away on Wednesday, February 20, 2019 at his home. Jack was born on March 8, 1930 in Peoria, IL to Jim and Rena (Newell) Murphy.  He married Jeanine Harney on February 8, 1952 at the First United Methodist Church in Chillicothe. Surviving are three children, Mike Murphy of Niota, Tim (Diane) Murphy of Chillicothe, and Tammy (Mike) Stumbaugh of Sparland; grandchildren, Amy (Ernest) Robinson, Adam (Rachel) Murphy, Tracy Smith, Katelyn (Justin) Schoch, Chelsy (Seth) Braun, and Jodi Stumbaugh; great grandchildren, Brooklyn, Brody, Ally, Carly, Leah, Noah, Owen, Murphy, Ella and Colie.  Also surviving are his nieces and nephews whom were like his own children, Lee (Sara) Braun, Sue (Don) Hoffman, Dean (Candy) Braun and Fran Widmar.  He was preceded in death by his wife, his parents; his sister, Mary Jane Braun; and his brother, Jim Murphy. Jack served in the U.S. Navy during the Korean War and then he worked for the Santa Fe Railroad for 50 years as a Conductor.  He was a Guide for the Rice Pond in Chillicothe for 60 years.  Jack also grew vegetables on his farm for family and friends. Cremation rites will be accorded following a gathering of relative and friends that will be held on Sunday, February 24, 2019 from 2pm to 5pm at Weber-Hurd Funeral Home in Chillicothe.  In lieu of flowers, memorials may be made to the Boy Scouts Troop 91.  Online condolences may be made through www.weberhurdfuneralhome.com

To send flowers to the family or plant a tree in memory of Jack Murphy, please visit our floral store.

To send flowers to the family in memory of Jack Murphy, please visit our flower store.