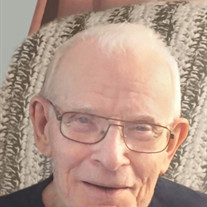 Clarence E. Miller, age 85, of Lacon, went to his Heavenly home on Tuesday, March 19, 2019 at St. Joseph Home in Lacon. Clarence was born on September 16, 1933 in Elmwood, IL to Clarence Wilbur and Mabel Adell (McVey) Pankake Roberts. Surviving are his daughters, Terri (Chuck) Smith of Hopewell and Ellen Miller of Peoria; his son-in-law, Kenny Mathews of Germantown Hills; 10 grandchildren, 17 great-grandchildren and three great-great-grandchildren.  Also surviving is his sister, Adell (Tom Stein) Moore of Peoria, IL and several nieces and nephews.  He was preceded in death by his parents; two brothers; two sisters; and two daughters, Chris Rutigliano and Kathy Mathews. Clarence served in the U.S. Army during the Korean War.  He then worked as a union plasterer and carpenter for 40 years.  Clarence volunteered for the American Red Cross and he enjoyed traveling and bowling.  He loved spending time with his family and friends and was an avid Cubs fan. Cremation rites will be accorded and a Memorial Mass will be held at the chapel at St. Joseph Home in Lacon on Friday, March 22, 2019 at 2pm.  Fr. John Bosco Mujuni will be officiating.  In lieu of flowers, memorials may be made to the St. Joseph Home.  Arrangements were handled through Weber-Hurd Funeral Home in Chillicothe.

To send flowers to the family or plant a tree in memory of Clarence E. Miller, please visit our floral store.

To send flowers to the family in memory of Clarence Miller, please visit our flower store.